How to Ride TRAX

Riding TRAX is easy when you follow these steps:


1.  Make sure you arrive at your station early and be sure to include enough time to purchase a ticket from the ticket vending machine if necessary. You must be on the platform, with proof of fare payment in hand before the train pulls into the station.

2. Go to your nearest TRAX station. You can board or exit TRAX at stations across the Salt Lake Valley. Parking is available at many TRAX stations. Schedules are posted all TRAX platforms.

4. Locate the correct platform. Look for the electronic signs overhead at each platform to see which side of the platform your train is coming, along with the approximate number of minutes the train will arrive.

6. Determine if this is the train you want to get on. Signs on the front of TRAX trains indicate whether the train is a Blue, Red or Green Line train as well as the destination.

7. Board the train. UTA has two different types of light rail trains. The Red, Green and S-Line Streetcar lines use a newer-model train, while the Blue line primarily uses an older-model of train. 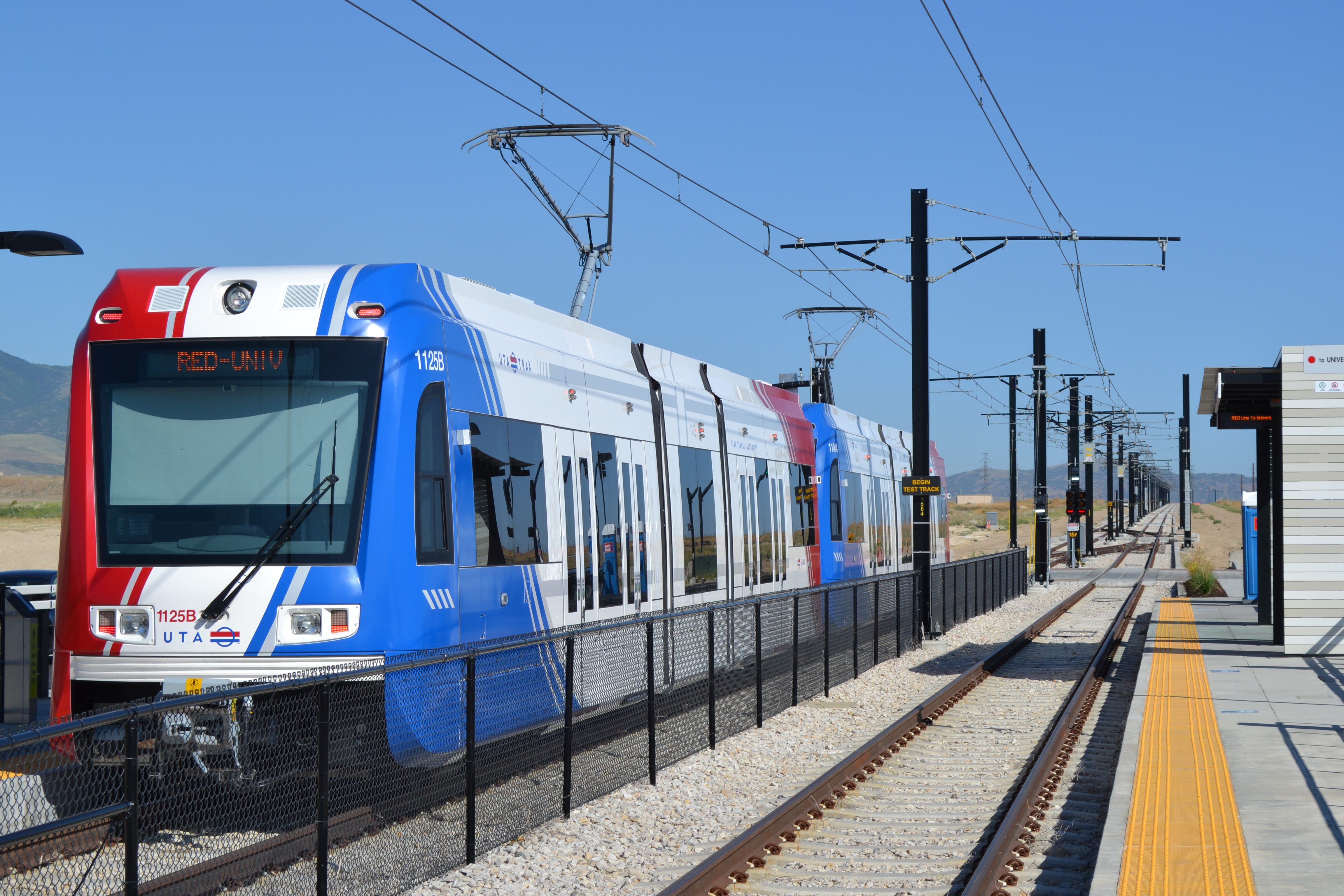 For the newer-model trains, once the train has stopped, push the green button on the door you would like to enter. Allow those exiting the train to leave before stepping aboard.

When entering the Blue line older-model trains, the green button to open the door is next to the door. Press the door and the accordion-style doors will open. Allow those exiting the trains to leave the train, then you can board. On the Blue line there are two steps up to get on the train. If you have any mobility issues (you have trouble walking or taking stairs, you are on crutches, you are in a wheelchair) then make your way to the ramp. See our accessibility page for directions regarding boarding the Blue line from the ramp access.

8. Be Ready for Fare Inspection. Fare inspectors circulate through rail cars to check for valid fare. Please be prepared to show the fare inspector your ticket/receipt or card when asked. UTA may issue a citation if you have not paid the appropriate fare.

UTA TRAX and bus does have a “free fare zone” in downtown Salt Lake City where you can ride for free. If you start or end your trip outside the Free Fare Zone, you’ll need valid fare.

9. Find your station and exit the train. TRAX trains stop at every station along the route. Announcements on the train tell you the next station that the train will stop, along with connection information (for example, if there is a connection at the TRAX station to FrontRunner, buses or other TRAX lines). These announcements are both audio and on a text display on many TRAX trains.

You can always look out the window at stops to see where you are, as all stations are clearly marked with their location on the platform. There are also maps on every train to show you the various TRAX routes in the UTA system.

As you exit the station, don’t forget to tap off if you paid with an electronic pass or FAREPAY card.

Remember to Be Safe on TRAX

Remember to be Safe When Taking TRAX

How to Pay Your Fares:

Learn all the tips—and taps—about paying your fare on UTA.

We’ll help you find the fastest way to get where you’re going on UTA.

Learn more about how UTA makes its services accessible for our passengers with disabilities.